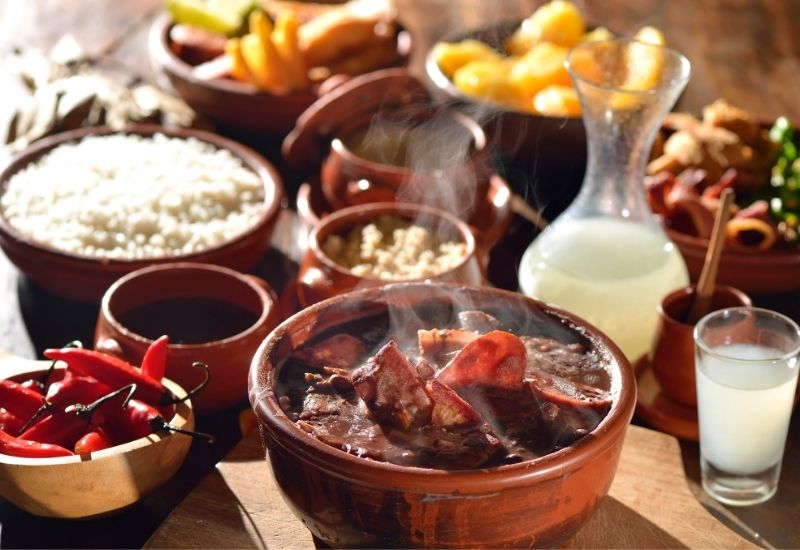 Portugal, sharing terrestrial commonalities and customs with the Mediterranean and the countries of Northern Europe, offers the most serene beaches, delicious food and port wine.

This charming country also serves as the world’s top surf spot and even has its own genre of music. But of course, that’s not what we’re here for, we are of course here for the spectacular traditional Portuguese cuisine!

Portuguese cuisine comprises a huge list of mouthwatering dishes and is famous around the world for its delicacies like freshly baked bread, red wine, chargrilled fish and cheeses.

As you would expect from a country with a lot of coastline, fish is a very common ingredient in Portuguese dishes. There are also a lot of similarities in cuisine with neighbors Spain and other Portuguese speaking countries such as Brazil.

So without further ado let’s take a look at the best that Portuguese cuisine has to offer.

Caldo Verde, an iconic traditional dish of Portugal, also known as Kale soup or green soup, is highly popular among the locals and tourists alike.

It is green in color and comprises a dark green cabbage, potatoes, sliced kale, chorizo sausage and collard greens. It is also fairly easy to make and takes just 1 hour to prepare.

Caldo Verde is also pretty nutritious as it contains healthy ingredients such as vegetables. Although it does look unappetizing at first glance, once you taste it, it’ll be difficult to resist.

Bacalhau is a very famous codfish. People started eating this fish back in the 14th century. The salted cod would be kept in the ships for years whereas fresh cod fish was obtained from the oceans during the journeys in ships.

Portuguese love the pungent-smelling dried fish. (Don’t get us started on smelly fish!). The most interesting thing about bacalhau is that there are 365 ways to prepare, one for each day of the year.

Hard-boiled eggs, potatoes, salted cod, onions and olives can be used with different variations to prepare this Portuguese delicacy.

Arroz de pato is a delectable dish made with rice and duck. Prepared using the aromatic herbs like garlic and bay leaf which truly represent the flavors of Portugal, this dish is widely popular in the country.

Made on special occasions, the traditional recipe also includes smoked pork. It is then baked and topped with orange slices. Although making this dish is time consuming, the final product is definitely worth the wait.

Bifanas are traditional Portuguese sandwiches made with pork slices that are poached in a sauce of paprika and white wine. Usually served with Piri Piri and mustard sauce, they are one of the most famous snacks of Portugal.

Due to its popularity even the McDonald’s chain has created the McBifana. This sandwich is always accompanied by a nice cold beer. It’s a really juicy sandwich with lime juice and spices like bay leaves, paprika, salt and garlic.

They are truly enjoyed during the football season in Portugal making them one of the most loved dishes by the locals and tourists alike.

The origin of this dish goes way back to the Peninsular war and it’s believed that the Napoleonic troops used to eat such toasts in which meat and cheese was added and now it’s a famous dish in Portugal by the name Francesinha.

This sandwich is made up of ham, Linguica and fresh sausages topped with fried egg.

Grilled sardines are summertime’s most famous food in Portugal. In June a ceremony is held every year dedicated to Sardines.

On the Day of Saint Anthony which is on June 12th and 13th, smoky aroma of grilled sardines starts wafting through the air.

Every year almost 12 pounds of Sardines are consumed by each person. The peak season of Sardines is June and August so don’t forget to have this amazingly delicious fish if you visit Portugal during these months.

White vinegar, bay leaves, olive oil, garlic etc. are also added in it to give it its characteristic flavor and aroma.

Octopus is one of the most fished marine species in Portugal. Polvo features baked octopus and mashed or roasted potatoes.

Cooking octopus in Portugal is usually a sign of happiness and polvo is prepared as a celebratory dish on the return of loved ones from the fishing boats.

Cozido à Portuguesa is one of the national dishes of Portugal consisting of ingredients like boiled potatoes, carrots, cabbages, meat, pig’s feet and ears and sausages.

This dish is specially loved for its delicious combination of pork with vegetables.

Our favorite Cozido a Portuguesa recipe.

Caracois is a dish prepared using snails. Due to extremely hot weather and humidity in summers, snail growth is promoted. So Portuguese flavor them with garlic, onions and olive oil to make a very delicious dish.

Piri Piri sauce and oregano are also used in a large amount to give them their characteristic flavor. Usually caracois is eaten as a late afternoon snack or also as an appetizer.

Feijoada derives its name from a Portuguese word Feijao which means beans. This stunning bean stew is prepared as a concoction of beans, pork and beef, served with white rice or bread.

Usually served during Portugal’s mild and rainy winters, it also comprises sausages, vegetables, cloves, paprika, bay leaves and garlic. Most people know the Brazilian version of this dish but it actually originated in Portugal. It takes at least 4 hours to get ready. But it’s for sure worth the wait.

Tripas A moda Do Porto

Possibly the strangest food on this list is Tripas A moda Do Porto which are tacos made from the meat of a cow’s stomach (tripas).

Despite the fact that cow’s stomach may sound weird, tripe is actually an ingredient enjoyed throughout the world. These exact tacos are also enjoyed in Mexico and in fact we have shared our own Tripas Tacos recipe previously.

Portuguese cuisine offers a wide variety of delicious dishes made using their own special aromatic herbs. So we highly recommend you to taste these dishes on your next trip to Portugal to delve in the true Portuguese flavors. 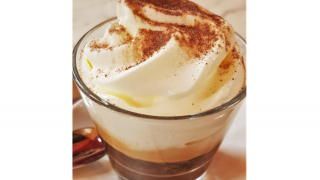 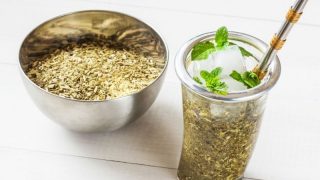