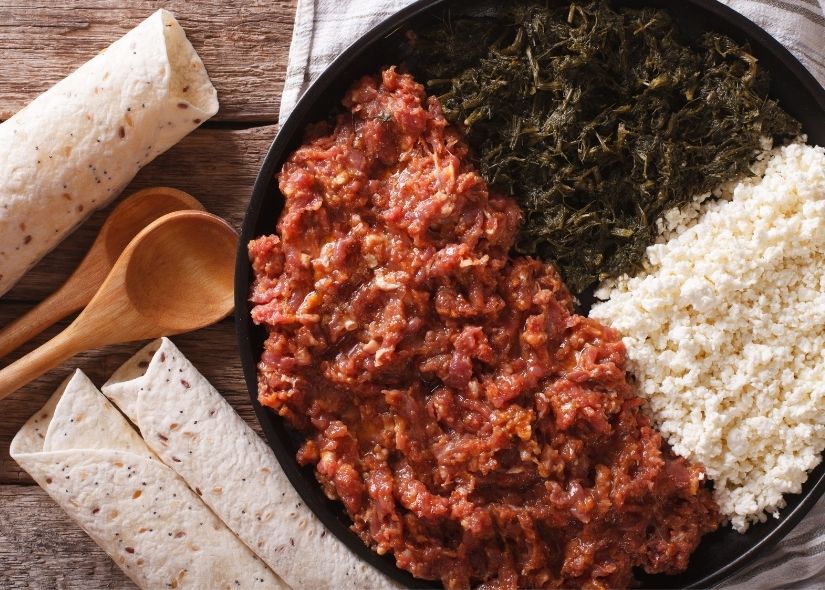 Ethiopia, located in the Eastern horn of Africa, is one of the biggest countries in terms of size and population in both Africa and the world. It’s no surprise then that it is home to a culinary culture that packs a real punch!

Ethiopian cuisine typically centres around the bread (injera) which is used as a vessel for spicy meats and vegetables. Ethiopians typically eat with their hands with injera scooping up stews, meats and sauces.

If you’re unfamiliar with Ethiopian food, the following dishes are the ones you absolutely must try. The rich aromas and spicy, tangy flavors served in a platter designed for sharing is an experience to behold.

So without further ado, here are the most popular traditional Ethiopian dishes to try.

Injera is a sour flatbread that is widely popular throughout Ethiopia. It is slightly thicker than a crepe but still thinner than a pancake and is used as a basis for eating a range of different dishes by tearing and scooping ingredients onto the bread.

Injera is a superfood in Ethiopia as it is made from teff flour, which comes from an ancient grain that was first developed in Ethiopia. It is filled with many beneficial nutrients, such as protein, calcium, iron, and is vegan-friendly as it is gluten-free.

When making the bread, it is naturally fermented which is why injera has a sourdough flavour. It is typically eaten with dips, collard greens, lentils, or nubs of meat.

While most Ethiopian foods are vegan-friendly, Tibs is Ethiopia’s go-to dish when they feel like eating meat. It is a dish typically cooked with sliced beef or goat, and it is one of the famous foods in Ethiopia.

The meat is typically fried along with other ingredients that are a staples such as butter or oil, onion, pepper and vegetables. Sometimes, Ethiopians cook tibs with rosemary and garlic and serve with a hot dipping sauce and rolls of injera.

Traditionally, Tibs is served to compliment or show respect to someone. Today it’s still viewed as a special dish, usually served during special occasions in Ethiopia.

Usually made from beef, Kitfo is a dish served raw and is typically eaten during special occasions. Kitfo is made from the leanest meat.

Another signature dish of Ethiopia, Kitfo is said to be the Ethiopian version of the French tartare. The meat is typically minced and warmed in a pan along with a little butter.

It is typically served raw, but you can also opt to have it slightly cooked. The meat will be mixed with mitmita, other blended spices, and niter kibbeh.

Shiro Wat or just Shiro is one of the most widely consumed dishes in Ethiopia. It is also a staple food during fasting season.

It is a lightly chickpea or bean puree with minced onions and garlic. Depending on regional variations, it could also include ground ginger or chopped tomatoes and chilli peppers.

The non-vegan version of this dish includes butter, while the vegan option of it includes olive oil when cooking. It is best paired with injera.

Doro Wat is a red-coloured chicken stew that is typically made from chicken drumsticks or wings. It is cooked along with other ingredients such as butter, onion, chilli, cardamom and berbere, which is a native Ethiopian spice.

Like other dishes of Ethiopia, doro wat is also served with rolls of injera. Traditionally, doro wat is usually served during national and traditional festivals but you can also see this in almost every Ethiopian restaurant.

Beyainatu is one of the many vegetarian dishes of Ethiopia. It is typically arranged on top of injera much like a veggie platter.

The majority of Ethiopians are Orthodox Christians, and they practice fasting every Wednesday and Friday. This is why many of them are vegetarians.

Breakfast isn’t a popular meal in Ethiopia but if you do ask for breakfast then Fir Fir is one of the most common options.

Fir fir is a spicy, tangy dish made with shredded injera, niter kibbeh, and spicy berbere powder. The dish has two varieties depending on the type of bread used for cooking: injera and kit (which is a thin bread made from wheat).

Fir fir is also one of a few rare Ethiopian foods that use a fork when eating.

Gomen (also known as Ye’abesha Gomen is another popular vegetarian dish. It is typically made from kale or collard greens, onions, niter kibbeh, and other spices sauteed and simmered together.

Gomen is usually served as a side dish for Ethiopian entrees. Typically, gomen can also be part of vegetable platters, such as doro wat.

Another very popular vegetarian dish is Misir Wat or red lentil stew. Lentils are abundant in the country, and Ethiopians took advantage of that and created misir wat. The lentils are cooked with onions, garlic, tomato paste, niter kibbeh, and berbere.

These are then cooked until they become tender. Like gomen and doro wat, misir wat can also be enjoyed on a vegetable platter or paired with rolls of injera.

Sega wat is spice beef stew that’s made using ingredients such as onions, garlic, ginger, cardamom, beef broth, niter kibbeh, and berbere. The beef pieces are added once the sauce thickens, then simmered until the liquid is reduced.

Spicy foods are also a big part of Ethiopian culture. Sega wat is one of the most popular traditional spicy foods of them all so it’s certainly one to seek out and add some variation. 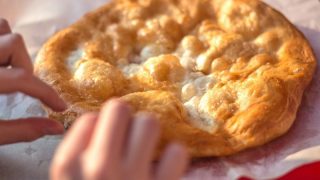 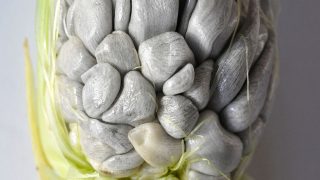 Next →
Huitlacoche (Corn Smut) & How To Eat It
Comments are closed.