Tamilok Woodworm: A Delicacy From The Philippines 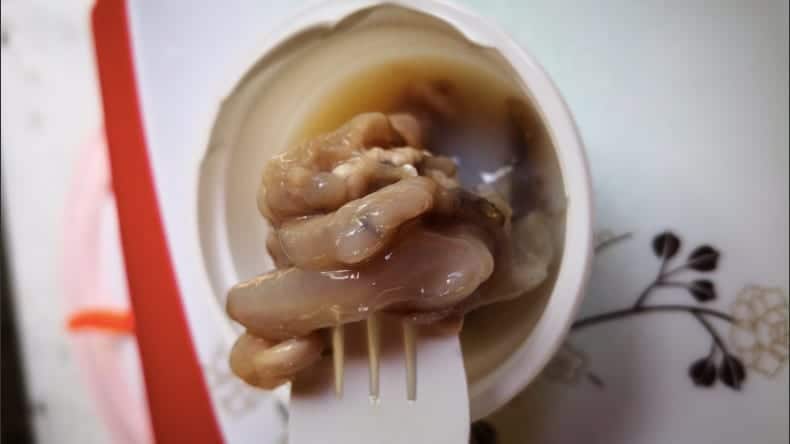 The Tamilok Woodworm delicacy, straight out of the Philippines. Undoubtedly a food for the adventurous traveller!

Hungry? No me neither!

Ok this is going to be up there with one of the weirdest foods we’ve found, but believe it or not, these slimy little worms are considered to be a delicious little snack in the Philippines regions of Palawan and Aklan.

What Is The Tamilok Woodworm?

Tamilok is a popular Filipino delicacy also known as ‘woodworm’ because it is found in decaying, rotten logs or thick tree trunks submerged underwater in swamps-like mangroves.

The wood is then cracked open in order to extract the slimy creatures from inside.

Once you’ve cracked open the log, you can find the tamilok clams wiggling through the wood, making holes as they go along.

Tamiloks love wood, it is their only food source, and they thrive in saltwater conditions. In fact, they die as soon as they are exposed to air, they just cannot live without that swampy goodness!

They are actually not woodworms at all but mollusks (like a clam or oyster), and they are in the same family as the mysterious shipworm.

There is a great story behind the name “Tamilok” which dates back to WW2 when two American GI’s observed the local Filipinos harvesting the woodworm, prompting one to yell to the other “Tommy, look!”.

The name stuck and it has been referred as such ever since.

Filipinos will often serve Tamilok at big celebrations or family gatherings, which is something to look forward to…

There are two main ways that tamilok is served as food. One is raw, ceviche-style, and the other is for it to be cooked and become a bit more palatable.

The ceviche style is known as Kinilaw which is a Filipino way of serving raw fish, with similarities to Poke.

You can find tamilok served by street food vendors in little cups for quite cheap. Raw and ready to eat!

Often served with a little sauce or wasabi for dipping, you can also find the dish at established restaurants either raw or cooked.

To prepare Tamilok, you remove the head and feet and then squeeze out the faeces to get it ready for cooking.

They then cure the whole worm in a mixture of coconut vinegar, lime juice, chili and salt to give it that ceviche-style flavour.

Of course, it goes without saying that raw is the best way for adventurous foodies to try tamilok. The worm is eaten whole, often with a side of beer, presumably to wipe out any memory of what you have just done.

Being a sea creature, most eaters suggest that tamilok tastes very fishy with a slimey, creamy, milky texture. Also being a clam, there are a lot of comparisons drawn to eating oysters in both the texture and flavor.

As you would probably expect, it’s not a dish that is packed with flavor and is not likely to become a hit with those who have more moderate palettes!

However, as word spreads about tamilok, locals are having to harvest more and more clams to meet the demand, causing damage to the ecosystems of the mangroves.

This video is a great insight into the Tamilok Woodworm from locals in the Philippines. There is also some preparation and tasting to feast your eyes on, so you can get an idea about how Tamilok is eaten and how it tastes.

Tourists travelling through Asia are likely to encounter all sorts of weird and wonderful foods and tamilok is certainly one to tick off the bucket list!

Filipino food is not all so bad, in fact many Filipino dishes are absolutely delicious! Check out our favorite dishes from the Philippines.