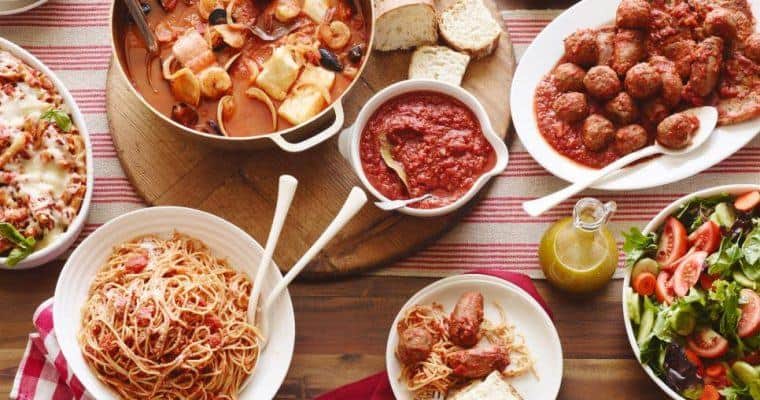 Traditional Italian food is arguably the most popular and well known cuisine in Europe and indeed the entire world.

Typical Italian ingredients, methods and dishes influence other palettes across the globe, and even spawn sub-cultures such as American-Italian food.

Generally Italian dishes are characterised by their simplicity, focusing heavily on fresh, quality, seasonal ingredients. Of course, Italian cuisine is mostly known worldwide for being the home of pizza, pasta and ragu.

Authenticity lies at the heart of traditional Italian cooking with a significance placed on preserving original recipes that have been passed down generations.

Furthermore, Italian dishes are often defined by regionality with certain foods being traceable back to a very specific region of Italy and sometimes even being named after that part, bolognese from Bologna for example.

The diversity by region, especially between the north and the south, is what makes Italian food so incredibly rich and varied, with so much to uncover.

Italian delicacies and specialities are also defined by family traditions and regional styles, so each Italian food experience you have can differ from one place to the next.

Whenever I travel to Italy I am constantly amazed by the difference it makes to eat the most authentic versions of dishes straight from the source.

If you only indulge in one thing on your Italian travels, make sure it is the food!

What Is Traditional Italian Cuisine? Best Dishes To Eat In Italy

Pasta, tomatoes, vegetables, cheese, fish, meat and olive oil are all central elements of Italian cuisine and the Mediterranean diet.

Traditionally the structure of an Italian meal can serve up to 10 courses, including aperitivo, antipasto, primo and dolce.

So here we go, these are the most iconic must-try Italian dishes you need to experience:

Lasagne is one of the most popular traditional Italian dishes that has been adapted and evolved around the world.

Its origins can be traced back to Naples or Emilia-Romagna (depending on who you talk to), where you can still find the authentic version.

Lasagne consists of beef ragu and vegetables layered between pasta sheets and bechamel sauce, topped with cheeses (most often parmesan or mozzarella), and oven baked.

Lasagna was never typically made with tomatoes as it was invented well before tomatoes were imported from the New World in the 16th century.

Ragu instead encompassed the rich meat stock flavours complimented by red wine, and is the delicious core of the traditional Italian lasagne.

Whilst Italy isn’t particularly well known for its rice dishes, risotto is a unique and unreserved part of traditional Italian cuisine.

Originating in Northern Italy, risotto is a creamy rice dish cooked in a broth with saffron, butter, wine and onion.

Meat, fish and vegetables are sometimes added depending on region, including shrimp, cuttlefish, peas, mushroom, chicken, bacon or chorizo.

First the butter and oil is heated in a pan before adding onions, white wine and broth. Rice is then added and very cooked slowly over a low heat, before adding in the final seasonings and toppings.

The result is a creamy, rich texture that packs a real punch of flavour.

Carbonara is another classic spaghetti dish very typically associated with Italian cooking and eaten around the world. Italian cuisine is an absolute haven of pasta dishes so it’s difficult to pick just one, but the carbonara just encompasses the simplicity of authentic Italian cooking so superbly.

The difference between a good carbonara and a bad carbonara is a simple misuse of ingredients or replacing essential aspects, for example using cream instead of creating the sauce from scratch. However, the pasta and the cheeses are interchangeable, with linguine or fettuccine sometimes substituting the spaghetti and parmesan sometimes replacing the pecorino romano.

Carbonara is made by combining raw eggs with cheese (pecorino romano or parmesan), then adding to hot pasta with fried guanciale pork cheek and black pepper.

Arancini was first developed as a way to make use of leftover risotto by creating a uniquely Italian snack.

Arancini are stuffed rice balls coated in flour and breadcrumbs and fried to a golden brown colour, but there are numerous variations of arancini depending on region including:

Arancini con ragù is the most common type of arancini however, and can be found all around Italy. Or you can try making arancini yourself.

However, there are similarities with Ragù alla bolognese which uses fresh tagliatelle instead of dried spaghetti and is less heavy on the tomato sauce. Furthermore, the dish doesn’t use oregano, basil or garlic like a spaghetti bolognese does, and certainly doesn’t go anywhere near cheddar cheese!

Ragu is a meat-based sauce used in many Italian pasta dishes and is made with ground meat, finely chopped sauteed celery and carrot, tomatoes, red wine, stock and milk, cooked on a very low heat for 3 or more hours.

The ingredients vary by region in Italy and can include different meats and liquids, and can often exclude tomatoes. Try this authentic ragu alla bolognese recipe yourself.

Pizza is the most exported dish of all traditional Italian dishes, being eaten in nearly every country in the world. Having first been invented in Naples, authentic Neapolitan pizza has now been officially registered as a ‘Traditional Speciality Guaranteed dish’ by the European Union as a means to protect and promote the original recipe.

Neapolitan pizza is the most simple and authentic of them all, consisting solely of a dough base with tomatoes, mozzarella cheese, fresh basil and olive oil.

However, there are other variations of pizza that are still authentic in Italy including pizza margherita and pizza marinara.

Traditionally, Italian style pizza is quite small and is usually just a serving for one, taking only approximately 2 minutes to cook in a pizza oven.  Moreover, too many toppings are considered inauthentic or less quality because fewer ingredients show a confidence in the quality of the products used to make the dish.

Of course it goes without saying that other evolutions of pizza developed outside of Italy, such as American-Italian style, are considered inauthentic and are not typically consumed by Italians.

If you’d like to try making this yourself, here’s a fantastic recipe for authentic neapolitan-style pizza.

Agnolotti is stuffed pasta which is made by stuffing pasta dough with roasted meat or vegetables with a really simple sauce so as not to distract too much from the flavor.

Agnolotti is similar to ravioli with the main difference being that Agnolotti is made with folded over pasta, rather than 2 square pieces like ravioli. In fact, we have a stunning chicken and mushroom agnolotti recipe for you to try yourself.

Prosciutto is often served as an antipasto in Italian meals and is simply dry-cured, uncooked ham cut thinly into slices.

Even though prosciutto is served uncooked, it is safe to eat thanks to the curing process.

It is made from the thigh or hind leg of a pig and is often served wrapped around a breadstick (grissini) or with melon. However, there are many other uses for prosciutto, often being included in pasta dishes or in stuffings of other meats.

Whilst you can buy different variants of prosciutto according to the different Italian regions, the most famous is prosciutto di Parma or Parma ham, which is developed over a period of up to 24 months by a salting and air-drying process.

Considered one of Tuscany’s most famous dishes, Ribollita has its roots in peasantry, having been eaten by servants made from leftovers.

Ribollita is a soup made of bread and vegetables such as cannellini beans, cabbage, carrots, potatoes, onion and celery. Servants would collect the unfinished leftovers from their masters and boil the different ingredients to make a hearty, filling meal.

The ingredients are simply added to a large pot of boiling water and stewed for an hour, allowing the bread to fall apart in to a thick consistency.

It is most commonly found in Tuscany and is a must try for tourists travelling to the region. Or try this Ribollita recipe yourself.

Tortellini are small parcels of stuffed pasta, nicknamed ‘belly button’ for their shape.

In Northern Italy, tortellini is often eaten on Christmas day as one of the many courses on the traditional Italian meal.

They are most commonly stuffed with a mixture of meat (prosciutto or pork loin) and/or cheese, and served in a broth.

There are many different types of stuffing ingredients depending on the variation of tortellini, but the emphasis with tortellini is on fresh, quality ingredients, as is typical with Italian cooking. Of course, Parmesan and Italian seasonings will add depth of flavor.

Regional Dishes to Try in Italy

For further inspiration take a look at this video of some of the most interesting regional dishes to try in Italy.

Of course, there is no better way to try Italian food than by visiting the different Italian regions and tasting the culinary delights cooked straight from the source.

If you’re ever in Italy over Christmas, you should try to seek out the famous feast of seven fishes for a truly cultural experience! 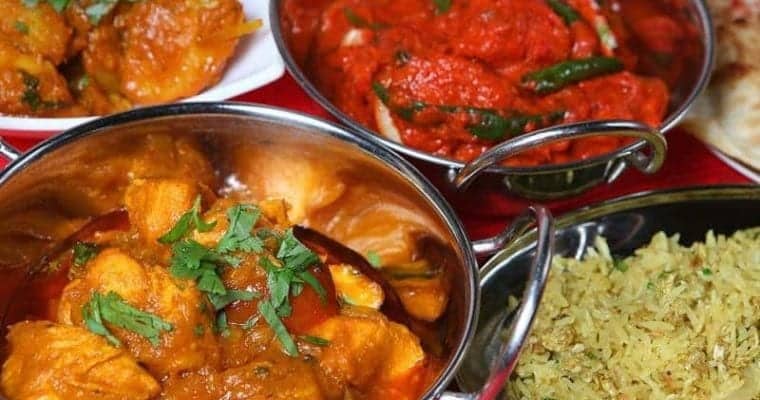 Next →
9 Traditional Bangladeshi Foods You Must Try

[…] picked my usual favorites and my goodness it was beyond amazing, on par with the quality of food I have had in Italy, you could have sworn Nona was in the kitchen making that […]

What Christmas Dinner Looks Like Around The World | Travel Food Atlas

[…] a typical hearty Italian feast of seven fishes (known locally as Festa dei sette pesci). Unlike many classic Italian feasts, however, there is a lack of pasta and meat, the latter being a symbolic abstinence prior to […]